our revenue is going down the shitter, we have lots of debt, our stadium is empty and matchday revenue is pathetic, we have very few assets in the squad that could bank us decent money.

people want galliani to sign a big midfielder, I'm not sure. if we end up spending 120m on transfers this season and still not get CL football our finances will be well and truly fucked, even more than they are now. we're bloating the squad with more and more fodder like kpb, vangioni, balo etc and players like luiz adriano, ndj that aren't contributing much + we have I don't know how many coaches on the payroll.

I don't think we're gonna close up shop, but every year we carry on like this will be another 2/3 years needed for recovery. 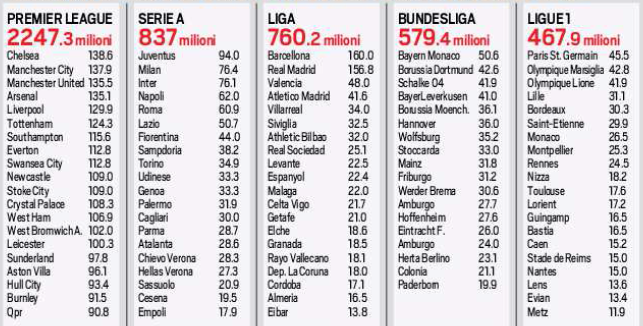 I think Milan is a far cry away from being as "doomed" as a lot of the fans think. Some people legit think Milan is close to hitting Ajax level of obscurity.

To me, Milan will survive off its brand for a long time. While it's true that our declining finances are worrying and will probably keep us back several years from the peak we once hit, it's not so bad that we can't easily stay/become competitive.

The way I see it, Milan will have suitors lined up for years(even as we play poorly). We've seen how many people are interested in investing/purchasing the club. Berlusconi is asking for a lot and it's probably turning away many suitors. But as Silvio ages and his family loses interest and patience with a brand that no longer benefits fininvest, it won't stay like that for many more years(we've already seen Berlu willing to negotiate for partial ownership).

Milan is falling behind its rivals in commercial revenue, but remains popular in places like Asia and South America. Those are big markets that could be worth a lot to a clever investor. If not Bee, some other businessman will come in thinking he can tap into the market that Galliani and company are failing to take advantage of. The major point here is that Milan, despite a negative trend, is simply a couple good decisions away from being a force still. If milans price drops in the coming years(and maybe if it doesn't), I'm sure some rich people will be eager to use the clubs massive fan base to do what Silvio did, gain popularity and relevance.

Lastly, I think as long as serie a remains decently competitive Milan will be okay. And lucky for the club, the league seems to be coming up slowly after a low point. it might take several years before we see a huge turn in milans fortune, but it would take a disaster to truly fall off. Milan remains a few smart investments away from greatness, and will probably remain so for a while. Juventus is a great example. They hit a much lower point than us, and even when they returned to serie a they were in a similar spot(consecutive mid table finishes). They tried to spend their way out, and made some piss poor decisions on players. I think up until last year they were still struggling to get fully rid of some shit players(sound like Galliani?). Then in one season, they changed things up and went undefeated. That growth kept going until they made the UCL final last year. I think Milan could be that, and if those changes don't come that soon, we'll still be alright.

a lot of work o be done

EPL broadcasting should be a punishable criminaality

Match day revenue is tragic. In hindsight ibra, TS sales were the worst decision ever. The fucktards should have listened do 30 year old barbara.

We are in dire need of new people at this club. In 2007 when we last won the CL Juve were in Serie B. Today they have their own stadium and make a profit. Today we have no stadium, a poor team and lose approximately 100 mil a year. That is failure on a monumental scale and Silvio and Galliani need to go.

Boban1982 said:
We are in dire need of new people at this club. In 2007 when we last won the CL Juve were in Serie B. Today they have their own stadium and make a profit. Today we have no stadium, a poor team and lose approximately 100 mil a year. That is failure on a monumental scale and Silvio and Galliani need to go.
Click to expand...

Just saw this news and wanted to post it, simply awful. Yes every big club has some debt, some even a lot ( see MUFC ) but they all manage to pay their loans and make a profit on top due to smart investing of the money borrowed.

AC Milan should be thought in business schools, as a don't do this model type thing.


Boban1982 said:
We are in dire need of new people at this club. In 2007 when we last won the CL Juve were in Serie B. Today they have their own stadium and make a profit. Today we have no stadium, a poor team and lose approximately 100 mil a year. That is failure on a monumental scale and Silvio and Galliani need to go.
Click to expand...

Milan is a failed state?

General said:
Milan is a failed state?
Click to expand...

no, a failed football club

And Berlu was wondering why the negotiations hit problems.... this deal is clearly off now, what an idiot. Chinese investment could have really made a big difference to Milan, and also helped Serie A...

Silvio Berlusconi caused outrage with his ‘joke’ about Chinese Communists eating babies. “And I’m supposed to give Milan to them?”

The President is currently in advanced negotiations to sell 70 per cent of the club to a Chinese conglomerate, which reportedly includes members of the Government.

However, he spoke to people after a political rally in Ostia, near Rome, and was filmed telling them about the situation.

“They had a huge famine and children were dying as their mothers didn’t have the milk, so to stop the other children going hungry they’d boil them up and eat them.

“And I am supposed to give Milan to them?”

He then made a gesture with his hands as if to say ‘what has the world come to?’
Click to expand...

Haven't really posted here for a while cause I knew the problem and could take people blaming coach after fired fucking fired coach. It was always the coach didn't have enough experience it was, the coaches formations are bad it was always someone elses fault but never Berlu's or Galiani's.

I'm finally happy to see that the majority of people on the form are now seeing that Berlu and Galiani are the problem.

This piece below sums up these assholes who brought the best and some of the worst times that Milan have ever seen....(the treatment of Maldini says it all)


This dispute typifies the problems that Milan currently face. The fact that Paolo Maldini has not been given a role within Milan is a downright disgrace. The fact that management is openly excluding arguably the greatest player to ever play for the club because of the fact that he knows that they are the problem is downright vile. A simple look around other Serie A clubs shows Pavel Nedved and Javier Zanetti working as directors for Juve and Inter, and Francesco Totti being promised a role at Roma when his playing career is over.

At Milan, legends such as Clarence Seedorf, Filippo Inzaghi and Paolo Maldini have been disrespected and cast aside despite the fact that all of them wanted to pay back Milan. The fact that these champions are denied roles within the club because they question the hierarchy and have their own unique ideas on how the club should be run is an absolute embarrassment. This feud shows just how badly Milan need a change in ownership and management, hopefully the Chinese consortium can provide that.

we become the worst team the world in every aspect, we can't even sell the club, sell the whole percentage already.

Juve's match-day revenue is actually unimpressive when you factor in their recent success and the amount of home games they played in 14/15.


I still want a new (smaller) stadium though...badly, even if it may not do much for our revenue. Can't stand the sight of a 2/3 empty San Siro and it's ugly seats anymore.

Just starting with this new channel. I know the video is too long but kindly provide some feedback for the same.

We will certainly cut it short to 2-4 mins for the future episodes.

And let me know if in the future if any of you want to participate in it as well.

The business plan submitted to UEFA by Milan has allegedly been leaked, with aims to more than double revenues in five years.

The Rossoneri have been taken over by Rossoneri Sport Luxembourg, funded by Yonghong Li and other Chinese investors.

That could see the Diavolo fall foul of Financial Fair Play rules, unless they can prove to UEFA that the outlay is a realistic way of growing revenues.

That would represent more than a 100 per cent increase over five years, something which UEFA may not deem to be realistic.

It’s believed that most of these increases are expected to arrive from the Chinese market, and the governing body of European football has asked for details of how that will be achieved.

Despite San Siro being shared with Inter and owned by the city council, Milan’s new owners expect to almost double match day revenue to €40m.

Finally, it appears the Rossoneri’s new owners are budgeting for a return to the Champions League next season, while expecting UEFA revenues to reach €68m by 2021-22, when they expect to win the Scudetto.

Money paid to football agents in 2016