vB9 said:
I still maintain that the English are too dumb for Ralf
Click to expand...

Or maybe ranger ralf aint what he's cracked up to be 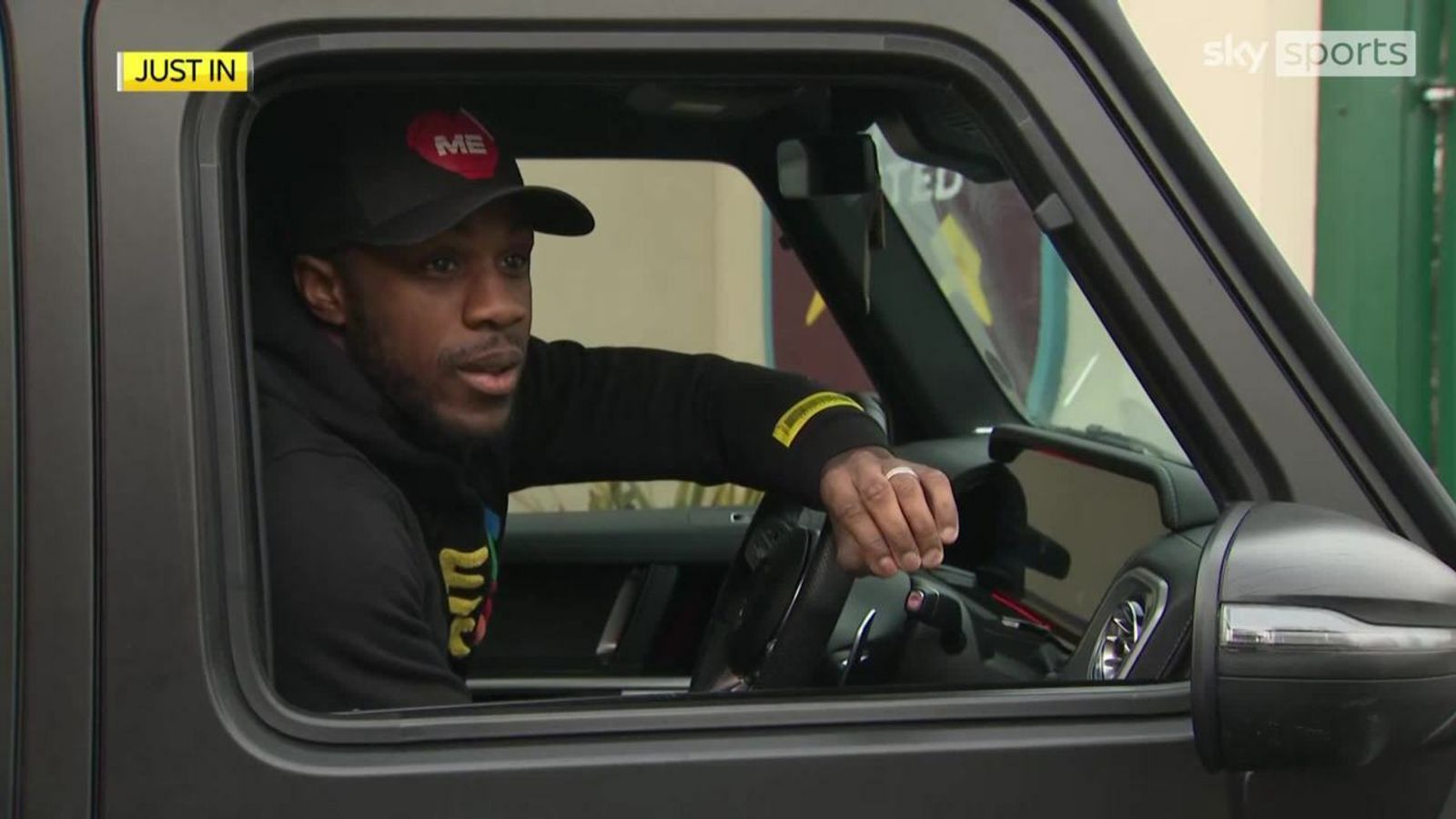 how come Greenwood, kicking a woman, gets removed from the team and released on bail

but Zouma, kicking an animal, gets a 250K fine (two weeks salary) and be allowed in the pitch?

sheva said:
how come Greenwood, kicking a woman, gets removed from the team and released on bail

but Zouma, kicking an animal, gets a 250K fine (two weeks salary) and be allowed in the pitch?
Click to expand...

in europe in opposite to africa or asia women are treated better than cows, goats, etc.

Rooney said he changed his studs to "long metal ones" when playing for Manchester United at Chelsea in 2006 as he "wanted to try and hurt someone".
United were beaten 3-0 and Chelsea won the Premier League that season.

"We knew if Chelsea won then they had won the league that day," said 36-year-old Rooney.

"Until my last game for Derby, I always wore the old plastic studs with the metal tip.

"For that game I changed them to big, long metal ones - the maximum length you could have because I wanted to try and hurt someone, try and injure someone.

"I knew they were going to win that game. You could feel they were a better team at the time so I changed my studs.

"The studs were legal but thinking if there's a challenge there I knew I'd want to go in for it properly, basically. I did actually.

"John Terry left the stadium on crutches. I left a hole in his foot and then I signed my shirt to him after the game... and a few weeks later I sent it to him and asked for my stud back.

"If you look back when they were celebrating, JT's got his crutches from that tackle."

In 2002, ex-Manchester United midfielder Roy Keane was banned and fined by the FA after a claim in his autobiography that he deliberately set out to hurt Manchester City midfielder Alf Inge Haaland in a game in April 2001.

Rooney joined United from Everton and, after returning for a second spell at the Goodison Park club, also played for DC United and Derby County before taking over as manager of the Rams in November 2020.

He is also England's all-time record goalscorer, having found the net 53 times for his country.

Responding to Rooney's comments, Terry posted a message on social media with a number of laughing emojis and said: "Is this when you left your stud in my foot?"
Click to expand...

Shut up, you bribing john terry... give the armband to CR, Ralph

what a time to be munited fan

VooDooDoll said:
what a time to be munited fan
Click to expand...

That’s why VB9 is acts like such a shmuck
S

Who was the microwave guy in the forums?

Fecking watch it all! But at min14 he talks abt Istanbul... he talks respectfully.

Didn't he get the metatarsal injury in that match? Completely deserved after hearing this. Never liked Rooney.

COMMENT: He's gone. Marcelo Bielsa. A huge loss for English football. But an even greater loss for Leeds United. For as chaotic and white-knuckle his football was on the pitch, off it, Bielsa had brought a stability to Elland Road not seen this century...

For the neutral. For this column. We've been robbed. Andrea Radrizzani, the club's chairman, has taken El Loco and his football away from us. And at 66 and given his loyalty to the city, we're unlikely to see Bielsa working inside the English game again.

It's a shame. A real shame. As we wrote last week, the struggles seen this campaign were always coming. Second season blues. A team of Championship talent no longer unknown. A lack of summer investment and squad planning. It's all caught up on Leeds. The board - Radrizzani, the remote control lot in San Francisco - they chose to stand still. To tread water. But as we argued, you can't do that in the Premier League. Even ALK realised that at Burnley. And now Leeds are suffering.

Some insist Bielsa can only have himself to blame. But the board and the manager have known eachother for almost four years. Radrizzani knew what he was getting when hiring the Argentine back in 2018. And nothing hasn't changed since.

Now everything built over these four years risks being lost. Bielsa, in terms of profile and recognition, carried this club. For a generation, Leeds had been out of sight, out of mind. But now, thanks to Bielsa, they're back within football's consciousness. Beyond England's shores. Indeed, perhaps even beyond Yorkshire. Bielsa's name and Leeds were joined at the hip. They were synonymous with eachother. Interchangeable. And for Leeds it worked. Players want to play for the Argentine. Fans across the globe want to see his team perform. There's a mystique about Bielsa that Leeds have been happy to ride - until now.

This all could've been prevented over the summer market. An experienced hand in goal. A Premier League-class centre-half, central midfielder and centre-forward. In other words, lift the quality of the team's spine. Last season's ninth place was achieved on adrenaline and surprise. But a year on, opposition managers and scouts had pulled apart Bielsa's promotion winners. They knew every tiny weakness. And it's all been hopelessly exploited this campaign.

In Italy, well, they're appalled. Appalled that Radrizzani would act like this. Speaking on Christian Vieri's Twitch show, Daniele Adani let rip. The former Italy international touching all the hot buttons many have laid out since Sunday's decision.

"We are talking about the most important figure in contemporary football, a prophet," Adani snapped on Bobo TV. "It is not so interesting that he no longer coaches, his philosophy will be handed down forever.

"And the four of us don't say it, football itself says it. Guardiola called him 'a gift'. People go on pilgrimage to seek his advice. Nobody was as lucky as the current Leeds president Radrizzani: he was 13th when Bielsa arrived. They finished third, then dominated the championship and the year after ninth in the Premier.

"Today he is gone, with a team that has only three new players plus the Championship players.

"(Serie B) Monza has spent more than Mr. Radrizzani to strengthen the team. Bielsa has nothing to say to Radrizzani, he talks to the people, practices a football of values that reaches people's hearts."

Harsh? Of course. As much as we can lament Bielsa's sacking, this wasn't unexpected. There is an argument to be made that Radrizzani had to act. Leeds are in freefall. Those who had been below them, particularly Burnley, Newcastle and even Watford, all acted with greater conviction during the January market. Should the Clarets win their game in hand, Leeds will fall into the bottom three.

But as mentioned, Leeds could've avoided all this if the board had been more decisive in the summer transfer window. Now, with Bielsa gone, they've again entered the unknown. Jesse Marsch arrives with plenty of goodwill and good press. But he didn't get to Christmas this season after his appointment by RB Leipzig. A foreign manager in a foreign competition and taking on a dressing room which is staring at the dropzone. This is a roll of the dice by Radrizzani if ever there was one. Indeed, it can argued Leeds have taken the bigger risk with Marsch's appointment than standing by Bielsa for the remainder of the season.

But this is the road the board have taken. A road into the unknown. Before Bielsa, there'd been 16 years of uncertainty. Of mediocrity. And then came the Argentine. Three years of success. Of stability. But then faced with a couple of unsteady months, the board chose to act.

Is it back to boom-bust time for Leeds? We'll soon know. But Bielsa, for the crazy football he brought us, also offered Leeds fans a respite of stability. It'll be a shame if that stability follows the Argentine out of Elland Road.
Click to expand...

Conte: Without CR7 for Utd it was very, very difficult not to win but also to draw.
Click to expand...

united has no shot at all