Pioli is closely linked with a move to Milan once Giampaolo is officially sacked, as the other choice in Spalletti has not agreed terms with Inter to terminate his contract.

His most impressive tenure was bringing Lazio to 3rd - their highest finish since winning the Scudetto - in 14/15 season. Also, his start at Inter winning 12 from 14 matches before eventually being sacked during a winless streak of 7 games.

Perhaps an option many fans will not be happy with, given he is mostly associated with midtable mediocrity and not the step up AC Milan need to step up to the level of top 4. Regardless, this second coach appointment should really determine whether the people making these choices - Maldini, Boban, Massara - are actually fit for their positions. Is there any point to weed out a failing coach for a potential other, rather than bringing in someone with experience at the top of the table?

We'll likely find out should Spalletti be unwilling to resolve his contractual issues with Inter if this becomes Official. Forza Milan. 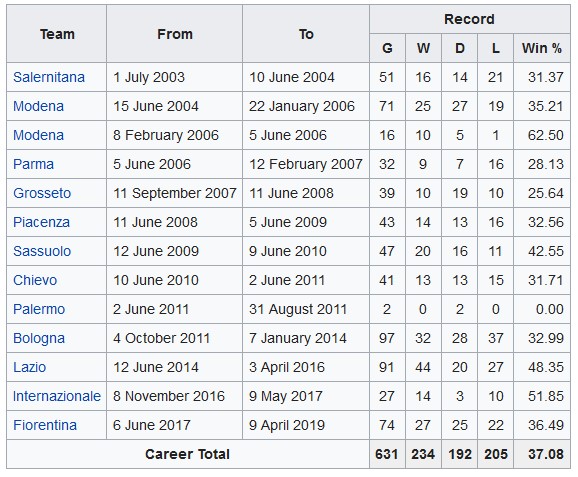 I AM the word

I'm trying to think of positive things and the following is the list:

1. His beard
2. His waistcoats. Absolutely dope. I expect to see a red waistcoat with black tie soon
3. His dressing in general. Probably our best dressed manager since Allegri
4. He's popular with players. I've heard players sentimentally talking about their good relationship with him in every club that he has left
5. Joyrider thinks Pioli is someone whom he doesn't want to mess with
Last edited: Oct 9, 2019

Chances of him being good or being even worse than Giampaolo are the equal.

Anyone is better than GP.

I think that this year we have a good squad + depth for top 4 and there should be some reinforcements in January. Any decent coach should be able to fight for this objective without an extraordinary effort.

My hope is that he can do the same as he did with Inter at the start and build on that. Anything close to 12 wins in 14 would be a miracle, and our currently squad I'd say is better than what he had at Inter. That is the solace I see, that he can turn things around in the interim for us although I would not see him as a solution beyond this year. I'd also say our top 4 hopes are more like top 6 if we're lucky now.

#PioliOut hashtag is already the top Twitter trend in Italy.

Pioli at the helm will be a freefall without a bungee rope. Saying we're doomed is an understatement

Yesterday, Spalletti was destined to become our new manager, and now we're sitting here with the cheap option, Stefano Pioli. Really, the difference is oceans apart.

At the moment, us Milan fans are being played the world's saddest song on the world's smallest violin - and that will continue until the managemnet opens their wallet.

what a joke. this management is clueless.... just wait for Spaletti and keep GP until then please. Pioli is a lateral move and we won't go anywhere special with him either... worst management I've seen at Milan, can't stand this

That's why I put it there and Necro changed it. Made it official before it is.

Every thread I made that I messed up the title or put in the wrong place, we had won that game. The one match thread I didn't actually mess up was last season derby that we lost. Let's hope it also works with managers.

This club is now officially a club of failures and losers...

My how far we've fallen

Cheap club, cheap dreams. Shit is disgusting. I fell in love with Milan in 2005/2006/2007 and haven't looked back since. I've seen them at the top with players who bled for the club and were as Milanista as they come. Now I look at the club and see 1-3 players who are worthy and I see almost nobody in management who is worthy, ESPECIALLY not Gazidis or Elliot & Co. Worst mistake we made was not getting Commisso who actually cares about the history of the club. All we are is a project to try and make money for Elliot and we are paying the ultimate price.

We have become so far removed from the club I grew to love that I honestly don't know what I'm supporting anymore??? The colors of the uniform??? Surely it's not the management... surely it's not most of these players... and surely it's not our current philosophy as we don't stay true to our history anymore... I am just praying this turns around at some point because in all of the years of Milan we are witnessing it's darkest days. I am so far down the rabbit hole with this club I can't support another club like I do Milan so it's either this turns around or I have to stop watching until something that reminds me of old Milan comes back again which seems a long long time away now....

Should move to official already

Thank you. I've added this to my positivity post towards the beginning of the thread.

Others - please feel free to contribute more positives of Pioli.

Now am gonna support him since its official.
Lets give him as much time as we did with GP.
GP made it easy being as shit as he turned out to be.
Benching Suso & Hakan without any other order will give us a better Milan.
Lessssss goooooooo.

Lets gooo calcioPioli.. hoping for the best.
At least make the matches watchable for me, its all i am asking for.

If Pioli can get the players to look as good on the pitch as he dresses up, I've no worries. Seems very professional and level-headed in his conference unlike GP.

He looks just like my grandfather did. Forza Pioli!

Good luck!
Pretty sure you will need this, like a lot.

On the three principles he wishes to instil: “Ideas, intensity and bravery.”

We can only hope. Lacked all three under GP.

I have every faith that Pioli is an upgrade from GP by far, BUT, we needed an actually experienced quality coach like Spalletti for this time period. Good luck Stefano... at least he's one classy dressed man

GP is pure beta male, at least it appears Pioli is not this way

Pingu said:
On the three principles he wishes to instil: “Ideas, intensity and bravery.”

We can only hope. Lacked all three under GP.
Click to expand...