Dis iz our anthem these days

Now get us Cannavaro and complete 2006. WC champions

i wonder what fabio grosso is up to these days?

: Berlusconi: I’m too old for so much sex


Premier Silvio Berlusconi has sat down with the enemy, telling an opposition newspaper that he is too old to have had all the sexual encounters he is accused of by Italian prosecutors.
The 74-year-old faces trial in Milan next month over charges he paid for sex with a Moroccan minor and used his influence to try cover it up. In court documents, prosecutors have identified 33 women, including the Moroccan teenager, who allegedly prostituted themselves during parties at Berlusconi’s villa near Milan.
“Even though I am a little mischievous … 33 girls in two months seems like too much even for a 30 year old,” the premier said in an interview published Wednesday in La Repubblica, a leftist newspaper that has led a campaign for his resignation in the wake of the scandal.
“It’s too much for anybody,” Berlusconi is quoted as saying. He insisted he has a girlfriend, whose identity is secret, who was always with him and would not have allowed what the prosecutors allege.
“She would have ripped my eyes out,” he said.
Berlusconi spoke to La Repubblica a few hours after Milan prosecutors notified three of his associates that an investigation into their alleged role in the scandal is closed. The move paves the way for the prosecutors’ request for an indictment against the three, accused of procuring women for the premier and, for one suspect, handling payments.
Berlusconi has already been indicted in the case and his trial opens on April 6. The premier said he plans to attend all hearings, and to appear on TV to defend himself and the women involved, who he said are now branded for life as prostitutes.
The prosecutor’s document details how the soirees at Berlusconi’s villa allegedly took place: They started with dinner; continued with “bunga bunga” parties in a room used as a disco, in which the women, sometimes masked, performed a striptease or an erotic dance “touching each other mutually, touching or being touched in their intimate areas by Silvio Berlusconi;” and culminated with Berlusconi’s choice of a sex partner, or partners.
Berlusconi told Repubblica “I could not believe my eyes” when he read the reports. He said “the girls were just shaking a leg in the disco – alone, as I’ve never liked dancing.”
The premier also rejected allegations that money changed hands via bank transfers, saying, “How can it be that someone pays for a sexual performance via bank transfer?”
He said he was just trying to help people in need, taking care of everything from dentist and surgery bills to university fees.
Paying for sex is not a crime in Italy, but it is if the prostitute is under the age of 18.
The Moroccan teen, Karima el-Mahroug, known by her nickname Ruby, turned 18 in November, but was a minor at the time of the alleged encounters.
Berlusconi is also accused of abusing his influence when he called police in May to get Ruby out of custody in Milan, where she had been held for an unrelated theft.
The prosecutors say the premier sought to keep his sexual relation with the girl secret. Berlusconi has said he intervened because he believed Ruby was the niece of now ousted Egyptian President Hosni Mubarak and wanted to prevent a diplomatic incident.
“I can swear that a week before, I had spoken with Mubarak about this girl for at least 15 minutes,” Berlusconi said in the interview. “The interpreters and fellow dinner participants can confirm it.”
He insisted he only sought information and did not exert any pressure.
“There is no victim and there is no favorable treatment,” he said. Ruby has also denied having a sexual relation with the premier.
The scandal has embarrassed Italy and made headlines across the world, with salacious details and allegations of Berlusconi’s wild parties splashed across newspapers for weeks. The case has provided fodder for comedians’ jokes, while spoofs of famous songs – including one named “Bunga Bunga” and modeled over Shakira’s World Cup anthem “Waka Waka” – are going viral on YouTube.
Ruby herself stole the spotlight when she showed up at the Vienna Opera Ball earlier this month, at the invitation of a millionaire known for his provocative selection of guests for one of the Austrian capital’s most exclusive events. And a pizza parlor in Poland has launched, to great success, a “bunga bunga” pizza.
Click to expand... 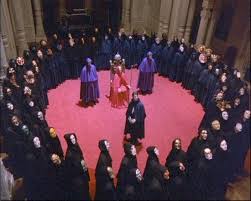 I guess Berlusca is into that Illuminati shit.

Dis iz our anthem these days

oh my. never thought i'd see fatC post a staind song. though after this winter transfer window this may be more appropriate.

ikita said:
oh my. never thought i'd see fatC post a staind song. though after this winter transfer window this may be more appropriate.

This describes our relationship with everything Milan related:

Very inappropriate. However one must be aware that Mussolini amongst italians isnt necessarily viewd as a bad guy.
S

Eccolo said:
Very inappropriate. However one must be aware that Mussolini amongst italians isnt necessarily viewd as a bad guy.
Click to expand...

yeah i get what he's saying, and he's right from an economic perspective.


but you don't say it


unless of course you're silvio and an idiot

warming up for the election

last month is was no racism this and no racism that to make certain groups happy, and now he got to balance it out.

Senatore_M84 said:
yeah i get what he's saying, and he's right from an economic perspective.


but you don't say it


unless of course you're silvio and an idiot
Click to expand...

define "idiot", he's one of the most successful men of this era.

Not even that controversial
S

MilanMB said:
define "idiot", he's one of the most successful men of this era.
Click to expand...

on the flip side.


has to buy balotelli to appease citizens

MilanMB said:
define "idiot", he's one of the most successful men of this era.
Click to expand...

Being successful doesnt mean that you are not an idiot

Eccolo said:
Being successful doesnt mean that you are not an idiot
Click to expand...

that's why i asked you to define what you mean when you say idiot, idiot.

I wouldn't call him an idiot.

He's always been an asshole though...and now he's either senile or at the verge of it, so its even worse.

He's nowhere near an idiot.

MilanMB said:
that's why i asked you to define what you mean when you say idiot, idiot.

You are being an idiot! A lovable one but still an idiot!

is the greatest negociator,EVER!!!He sold kaka for 70 mil,SHEVA for 45,Thiago for 35?Pato for 15.He brought IBRA for 20,which one year earlier was paid 40+ eto

.Ronaldiho for 20.And Kaka for 8 from brasil.

yeah, its brilliant how theres never any money available until he wants to sign one of his marquee attackers. how about spending this sum on a LB or GK one day?
S

Anybody who talks shit about

deserves to be shot

Who would have thought that we'd get Balo sooo cheap

is a political genius

On the one hand he defends Boateng's "anti racist" actions...then buys a fucking black player....he's really really not a racist

Senatore, the piece actually said that whilst the remarks were "scandalous" that Berlusconi actually seized momentum for his party in a shrewd move so why call him dumb??

Say he is disgusting or unscrupulous etc but dumb doesnt hold water on this.

Gotta say too - Galliani closing Balo for 20 over 5 years - mad skills. I am not even giving him the fodder clean out.