rossonero1 said:
Be careful with the PK comment. General will call you out for your love for Inter. RNB defense mechanism. How about Bonucci4Life?
Click to expand...

He wont, not after I spent precious hours of my life on stupid arguments with the merda crew and other shitcardi and skriniar groupies

vB9 said:
Many wud swap him for Patrick in a heartbeat. I wud.
Click to expand...

Which patrick, is it our new CB you're talking about?

LocalHero80 said:
Which patrick, is it our new CB you're talking about?
Click to expand...

Sure... lets just go with him and spare yr feelings : )

Sorry, me no understand
R

We can talk about Inter? Icardi? Your choice.

rossonero1 said:
We can talk about Inter? Icardi? Your choice.
Click to expand...

Why would I want to talk to you?
R

General said:
Why would I want to talk to you?
Click to expand...

Why wouldn’t you want to talk to me? I’m a delight.

I wouldnt mind Spaletti if Gattuso failed though. I wouldnt mind Donadoni too, as much as everyone underrates him. I dont think he's much worse than Luciano, he just never got a top club job. Spaletti plays shit football as well.

vB9 said:
Shit's so sad Im thinking of dl'ing FM along with editor and bring back Milan myself
Click to expand...

you can download the Sims 4 and make Milan family successful there. Same effect, at least some satisfaction.

rossonero1 said:
Why wouldn’t you want to talk to me? I’m a delight.
Click to expand...

I can’t talk to you. It’s a conflict.

LocalHero80 said:
If only you saw how much shit was poured on Spaletti by inter fans after todays game

I wouldnt mind Spaletti if Gattuso failed though. I wouldnt mind Donadoni too, as much as everyone underrates him. I dont think he's much worse than Luciano, he just never got a top club job. Spaletti plays shit football as well.
Click to expand...

I hold out hope for our lord and savior Conte.
R

I can’t talk to you. It’s a conflict.

I’m not trying to obstruct justice. Please, let’s be friends?

Hard to be friends with a potential felon
R

Alec said:
Hard to be friends with a potential felon
Click to expand...

If the glove doesn’t fit, you must acquit. If I’m guilty of anything, it’s wanting the best for Milan and not mediocrity.
Last edited: Nov 12, 2018

Rino confirmed Hakan is still playing with an injury, and it shows. Says he starts him cause he can still be useful. But he's not, let him recover mentally and physically, its clear he's not up to the task. And then RnB keeps shitting on him 24/7. He better not start for a while.

rossonero1 said:
If the glove doesn’t fit, you must acquit. If I’m guilty of anything, it’s wanting the best for Milan and not mediocrity.
Click to expand...

Save it for judge General.

I want Montolivo back in the middle until January. Kessie and Bakyoko is all brawn and 0 passing.

Is that gazidis smiling? Tonight? What did he smile for? We lose 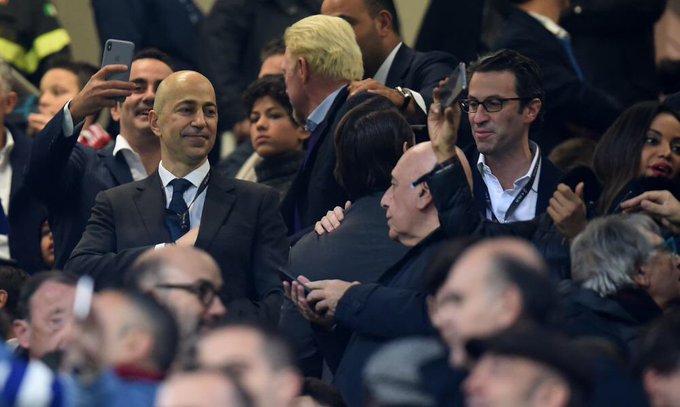 Sent from my XT1663 using Tapatalk

abritcemeng said:
Is that gazidis smiling? Tonight? What did he smile for? We lose

Sent from my XT1663 using Tapatalk
Click to expand...

He's thinking.. "i cant wait to replace every one of these fodder players"

probably saw Abate v Ronaldo on the right side and then Borini sub in at RB, now that was fucking embarrassing and all i could do was laugh

Yes, a rapist being able to play football when he should be incarcerated instead is indeed very embarrassing.

rossonero1 said:
I hold out hope for our lord and savior Conte.
Click to expand...

Cunte is your lord, not ours. This is a Milan forum, right?

Chiko said:
What? Everytime Higuain touches the ball his first touch was like he was touching hot fire. It’s not that we never created, it’s that when we gave them anything they messed up. Especially Higuain, on 3 separate occasions, he messed up his first touch in the penalty area or in around the 18 yard box. It’s Juve we not getting many chances and every chance was squandered. And it’s Juve you can’t expect it on a plate, a good touch and shoot sometimes is need. That’s what a striker is meant to do, but for some chance creation means they must be alone with a lot of time to shoot, that won’t happen against top teams.

It’s all good and well to feed the strikers, but they also need to help. Cutrone has the same issue, gets the ball in the box, gets bullied and loses the ball.
Click to expand...

Of course the strikers need to put more, but THEY ARE NOT GETTING GOOD SERVICE. Even against small sides we usually don't create more than 3 good situations per game. It's our effectiveness that keeps us alive. It's all on Suso because the rest of the midfield is as creative as Muntari. Yes, Higuan fucked up 2-3 good balls around the box by his poor first touch, but they were not open situations, he needed to work on them a lot, while Analdo only had to tap-in. Mandzukic only had to pressure a bit RR, who was not aware that Mario is behind him. Dona had another 2 good saves + the post hit by Dybala. Here you go with 5 occassions where they could've scored, not to mention both times Zapata's head stopped monstrous shots that seemed to be on the target, while we had 2 shots on target (Suso from 25+m and the penalty). This is how this results happened.

yall do realize that the other teams know we rely on suso and make it hard for him to operate right? look at juve having matuidi and sandro follow him everywhere...

if this man went on a more dangerous team and was given the same role he would go nuts. we need to make the left side comparable.
P

Raz said:
More than 70 million spent on Laxalt, Calhanoglu, Castillejo, and Borini.
We could have gotten 2 players that could have really helped us for that money and signed some freebies for cover.
We need to stop buying just for the sake of buying and signing half-players that don't fit our tactical needs.
We still don't have a proper left winger, our midfield options are still woeful, our fullbacks are average at best.
And then we're forced to switch formations, which messes with our form.
We still lack stability to get back into CL.
Our January window needs to be perfect. Paqueta looks promising, but I really don't know if he's gonna be able to help us out immediately. And if the team doesn't get the stability it will also hurt him and the chances that he ends up a flop will increase.
We need to get some fucking consistency asap. Right now there isn't any
Click to expand...

that is why i say leo had bad transfer in summer

only good thing is that we can sell those players ealsy and get same amount of money.

patosheva said:
that is why i say leo had bad transfer in summer

only good thing is that we can sell those players ealsy and get same amount of money.
Click to expand...

Leo had what - 21 days and UEFA on his ass for mercato? Yeah, shit situation.

We took Laxalt because Genoa had money issues when trying to pay for Lapadula; Laxalt had decent WC; Leo may have already known that Strinic had a heart problem.

Samu was taken because of Villareal and their money problems. Why? Because we needed a LW anyway and Samu can play LW and RW, therefore being backup to both Hakan and Suso and we were looking to offload Bacca who only wanted Villareal.

These aren't really bad transfers and judging them now is way too soon. Samu and Laxalt are inconsistent but they have good moments too. They aren't players that came for big money, don't expect great things - manage your expectations for them in a realistic fashion and you'll have a better, more accurate judgement.