Kojak said:
Lmao there's no better way of signifying the end of the banter era other than Milan winning the Scudetto and Genoa getting relegated

Napoli defeated Genoa to ensure their relegation and I saw a comment that both got promoted in the same year in 2007.

Longbowman said:
He was very good vs Inter too at San Siro.
But he was a major disappointment in the 6-1 Napoli defeat.. almost every one in Sassuolo was terrible in that game though.
Click to expand...

Re Napoli, apparently they want him to replace Osimhen and they ALWAYS get their striker signings spot on i.e. Cavani, Higuain + Osimhen. Also, over the past two seasons, Scamacca has either scored/assisted against all of the big teams (Milan, Inter, Roma, Fiorentina, Juve, Lazio + Napoli) so is definitely a big game player despite being 23yo. 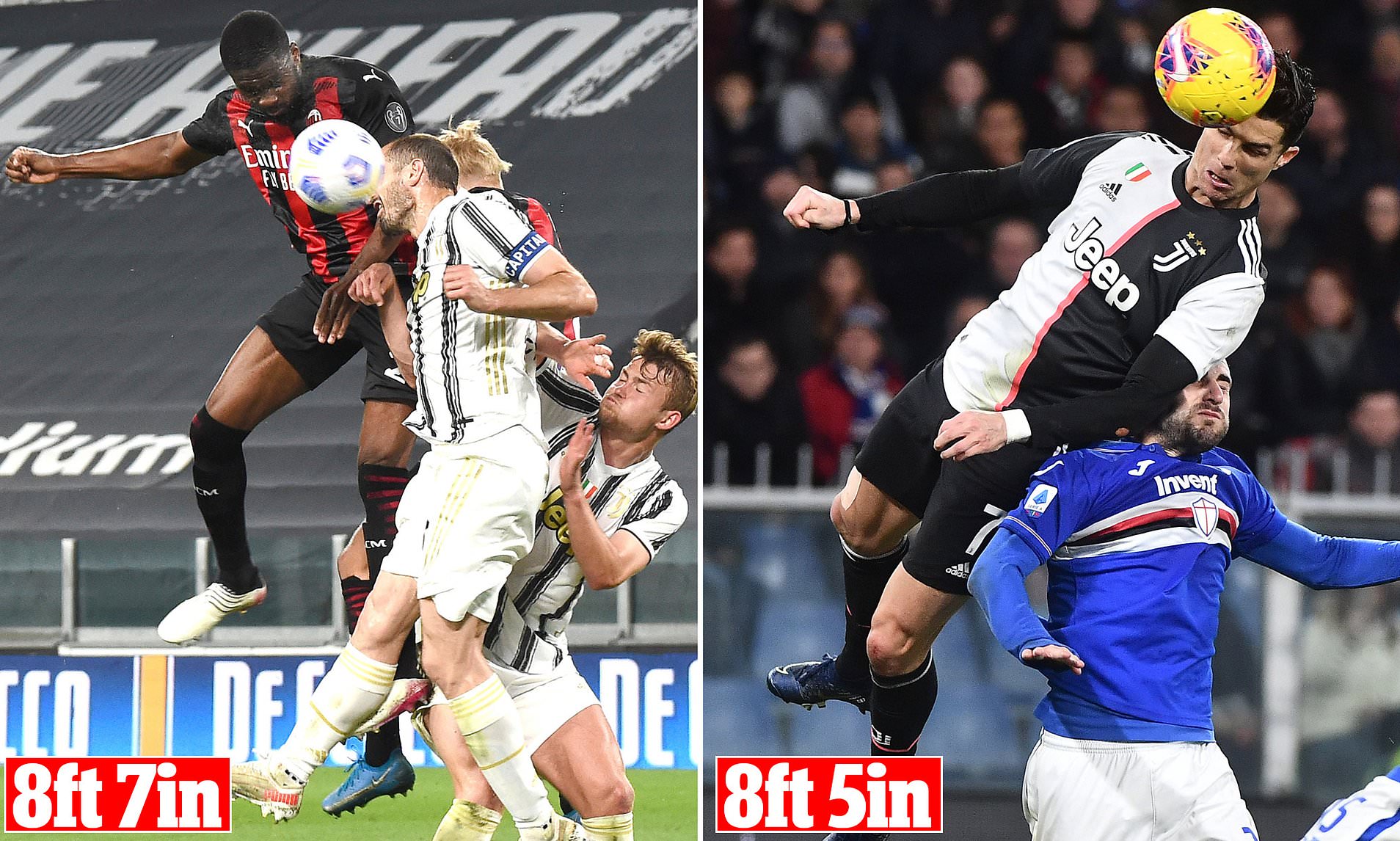 Cristiano Ronaldo's Serie A record is broken by Fikayo Tomori against Juventus.
Click to expand...

I mean dont get me wrong but with our current lineup we dont have the Van Dijks etc that are aerialy super dominant but yes I agree, our corners have been sub-par for the whole season

taking about the Sas boys..

Give Sassuolo's loud mouth CEO 20m + Pobega on loan in exchange for both Scamacca + Berardi for a season and pick up 'IL LESBO' for free (don't think he's going to Inter after THAT reaction).

taura said:
I mean dont get me wrong but with our current lineup we dont have the Van Dijks etc that are aerialy super dominant but yes I agree, our corners have been sub-par for the whole season
Click to expand...

Botman and Origi are good in the air.
Though I hate him for his behaviour, Hakan was good with corners and his set piece quality is reflecting on Inter's performance this year. Plus they have tall guys in the team.
i thought Tonali would probably make up for Hakan's set piece quality but it has not happened.

MilanBG said:
Well, I am European and a Christian, but I don't really get it either. What is the point of these posts? I have nothing against them to be honest, but why do they (not Milan specifically, but the whole world) always need to show support to some minority groups? Why aren't there posts saying that they love and support straight people with kids and normal jobs? I feel like 20 years from now, I will be oppressed just because my whole family is white and none of us is gay.
Click to expand...

Why supporting minorities is important!?

How many times in your life have you been discriminated against, bullied, beaten, ridiculed, excluded, shunned, ignored, belittled or called inferior because you are straight white guy?

Holy shit. I can't believe you have to be told this. I would have expected more maturity and understanding from someone your age.


MilanBG said:
Doesn't bother me at all. My point is that none of these is actually helping integrating these people that feel oppressed. Absolutely useless post by the Milan admin. Just triggered half of the Persian gulf.
Click to expand...

Isn't that exactly the point? Just because certain countries are still living in the Middle Ages and triggered by such messages it doesn't mean that a wordly club like AC Milan can no longer stand up for affected minorities if they feel the necessity to do so. No??

Frattesi is another player we've been linked to...looks like Sunday's game will also be a scouting mission although I hope that all 3 of them DON'T make the next team of the week...

Kojak said:
If we win the Scudetto on Sunday, Ibra is 1000% retiring (perfect ending to his career). However, I don't think that SCUMacca is the guy to replace him despite the similarities...
Click to expand...

Yeah, I don't think the best solution is to get a striker similar to Zlatan ( unless he is the level of peak Zlatan) . The current Milan has done well when Rebic was played as striker. It seems a quick, mobile striker would suit the current setup better

Longbowman said:
We had Diaz, Salad, Romagnoli and Bakayoko in the starting line up.

Against Atalanta we had Krunic taking most of our set pieces. He was, along with Giroud, our best aerial threat. I really don’t understand our set pieces choices.

Lol we're 1st and they haven't even qualified for the CL so we good...

Samaldinho said:
Leao's case determination got delayed for another few days according to TMW after the hearing.
Click to expand...

Didn't someone say here that Ten Haag found Botman as not good enough for Ajax and sold him?

it's our first completed signing. confirmed by all the transfer gurus on Twitter

brk said:
Against Atalanta we had Krunic taking most of our set pieces. He was, along with Giroud, our best aerial threat. I really don’t understand our set pieces choices.
Click to expand...

Yeah me neither. I dont get why Theo is taking left corners either since he should be the one outside the box waiting for rebounds to volley home..he's scored multiple screamers already. After the Tonali fk goal and the period where he was taking corners regularly, I though we found a guy to take over from kebab. .but it seems like the team plays rock paper scissors for every set piece on whos gonna take it

leaf said:
Now THIS is gay

Shit i forgot to say #nohomo

Ryo said:
The perfect storm is the fact that we have Elliot, we have Maldini, we have Massara, we have Moncada and we have Pioli and Ibra.

Don't think any other club have that sort of talent across the board in identifying in undervalued assets (Moncada), bringing them in successfully (Maldini & Massara), and nurturing them and making them the best versions of themselves that they can be (Pioli and Ibra). Even our club ethos is probably way different to most other clubs, which is why almost every player who has come to us only has good things to say about us.

The fact that we were able to do all of this also coincides with, as unfortunate as it is to say, the global pandemic, which forced all other clubs to examine their business sustainability when revenues were cut significantly and public health was the priority.
Had this not happened, all the clubs that borrow money and invest heavily through debt (ala Merda and Ladri) would still be forcing up prices of players. As would all those Super agents out there. Mediocre players would still be selling for 80M to 120M a piece. Elliot's management of the club, forcing us to reduce debt and lower expenses was always going to be hard to take (especially the not buying good players part) before the pandemic. We would never have been able to make out with the deals that we did for the likes of Mike, Tomori or Tonali. Their original clubs would be asking for exorbitant fees under normal circumstances.

Elliot's self-sustainability mandate saved our asses and led us in the right direction, but lets not kid ourselves. Had there been no pandemic to prove just how sustainable the model is in times of crisis, it would really be business as usual and excessive spending by all the money-rich clubs out there. If Covid had not happened, resetting a lot of revenue streams globally and exposing football clubs for the unsustainable, unhealthy money sinks that they were, forcing clubs like Barca and Madrid to shed players like Messi and Sergio Ramos, it would probably really have taken the 5 years which Maldini & Co had projected for us to get back into top 4 and Champions League contention.

One day, we're going to look back on this period, and realize just how blessed we were despite all the tragedy that was going on.
Click to expand...

Took a while, but I finally found the video I wanted to attach to this post:


This will be us for 2022.
I really hope they make a continuation of this short, to encompass what happened this season.
Enjoy
Last edited: May 17, 2022

You will look a little silly if he ends up signing.

Leeds could very well go down, burnley has a game in hand on them.

Go for raphinha if they do

MilanMB said:
Do you feel that any of the fight scenes in Avengers are realistic?

Balo45 said:
Leeds could very well go down, burnley has a game in hand on them.

Go for raphinha if they do
Click to expand...

He's Barcelona bound either way, already agreed terms with them, Deco is working to finalize the deal no matter if they stay up or not

biggest profitters from referee errors are sassuolo and salernitana, worst ones are roma and torino

biggest profitters from referee errors are sassuolo and salernitana, worst ones are roma and torino
Click to expand...

Sucks that several specific games would've handed us Scudetto already. Spezia, Udinese, Napoli. Any of those not being scandalously officiated.

The plusvalenza scandal has been thrown out of court again.

The entire basis of the investigation is flawed according to the courts, because "there is no way to really evaluate the value of a player." In other words, cheating is allowed as long as two clubs agree

mumbojumbo said:
a project that is crashing down.
Click to expand...

Question is, why does all this bother you? This are all fictional characters, just like Jesus. That's why Christianity can get away with pretending he was a white guy.

(I hope Idris Elba is the next Bond)
Click to expand...

You can doubt the miracles, not his existence.

Hitchens said:
The plusvalenza scandal has been thrown out of court again.

The entire basis of the investigation is flawed according to the courts, because "there is no way to really evaluate the value of a player." In other words, cheating is allowed as long as two clubs agree

Well I highly doubt that teams outside of Italy will play that game again for a while.
The pandemic helped to push player values down to reasonable levels.
Not to mention creative accounting nowadays will be scrutinized way harder than pre-pandemic.

biggest profitters from referee errors are sassuolo and salernitana, worst ones are roma and torino
Click to expand...

Can we try and recall which errors were which?