Gibbs-White would be a really good find.
Maybe I'm wrong but he looks different to your typical number 10. More physical. And he'll probably get even bigger and stronger. It doesn't stop him being nimble.

Not sure if it's realistic as we'd already have Adli as the inexperienced guy who you'd think is going to be back up.
I actually think Gibbs-White would hit the ground running better than Adli.

Loool, it's so embarassing

brk said:
I think they meant to say ‘above 10m’ but it went wrong. YouTube highlights from his loan spell are really impressive. Fits what we need our RW to do offensively.

Fbref doesn’t have data for Championship games.
Click to expand...

Not sure he could play RW. Don't really understand the formation Sheffield United play. Because in some games they had him LW or RW and even had Berge on the other wing. Even less suited to playing on the wing.

Berge was a dream signing last year for me. Made so much sense to get him instead of Bakayoko. Wonder if there is a still a clause allowing him to go very cheap.
O

Congo Powers said:
That level of cheekbone
Click to expand...

They took DNA from Rebic and Ivan Drago to create Botman.
S

Wait, if Mbappe is turning down the PSG offer, isn't that a show that he's not playing for money, but ambition?

Kmoney said:
If we can’t get Darwin, I’m pretty sold on Scamacca. We need another Italian anyway. Origi as starter is a massive risk, one which we don’t need to take honestly

Darwin is a big no no...it goes completely against MMM's transfer strategy.

However, I'm high on Scamacca too and believe that he could be the next BIG thing in Italian football i.e. Tonali, Bastoni, Barella, Chiesa, Zaniolo etc so don't want to miss out. Also, he seems like a carbon copy of Ibra (although inferior) plus he averages a goal/assist every 1.5 games in Serie A playing for midtable Sassuolo so just imagine what he could do with a better support system.

In fact, we're probably better off signing Berardi too instead of some young, flash, foreign winger who may take a couple of seasons to adjust to Serie A. Also, the defensive, hard working aspect of Berardi's game will help to create balance plus his Serie A stats for the past 3 seasons are phenomenal. There's also less chance of Scamacca or Berardi flopping if we sign both as they already know each other inside out (similar to the Helveg-Bierhoff double signing in 1998).

Holy shit. So a home away from home game

They forgot to mention that he's also in the running to be France's next President and will soon take over the reigns as the Emir of Qatar!

Yes! Exactly what the boys need.

Do you have a source for that, Sam?

Do you have a source for that, Sam?
Click to expand...

Do you have a source for that, Sam?
Click to expand...

brk said:
Thanks! I'm just going by what Calcio Finanza said Florenzi is paid, and gave him a 2 year contract and 4.5m transfer fee, which is our option on him. If we get him for less, great! If not, I still think we should get him. Italian, versatile, excellent squad influence.
Click to expand...

Personally, I would pass on Florenzi as he won't get a look in @ RB next season with Calabria + Kalulu ahead of him plus we're 100% guaranteed to sign a starting RW. Therefore, his transfer fee + salary seem excessive for a player with his injury history who won't receive much playing time. Having said that, I WOULD redeem him if the plan is to offload both Salad + Messias as he'll be a much more useful alternative on the right flank.

We also have a few double agents on the pitch we're interested in i.e. Traore, Berardi, Scamacca + Fratessi

I'd go for Rueben Neves.

Assuming no insane takeover spending spree...IL LESBO/Adli/Renato can rotate @ AM and Renato/Benny/Adli can rotate @ CM too.

Would love to see this happen

doraemon said:
I have serious question for everyone, how many LGBT members do you know that support football club or even watch football? I don't mean any offence just asking out of curiousity
Click to expand...

(joke homie...I know your unborn son is destined to smash Nordahl's scoring record in the year 2050 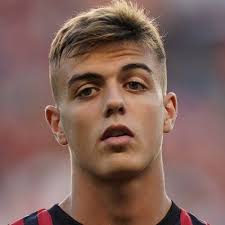 Didn't Sassuolo come out and say no Milan shirts were allowed in the home section?

(joke homie...I know your unborn son is destined to smash Nordahl's scoring record in the year 2050

I am homo for Maldini. Is that wrong? We all are in the AC Milan community. Or, we should be. Who does not desire such a man?

bro there is absolutely 0 chance we sign Dybala lol

And Berardi is about the furthest thing from an MMM signing

Berardi, also slow, also does not press, and does not provide defensive cover.

Scamacca though? I'll take that.

mihir00 said:
Would love to see this happen
Click to expand...

Honestly it's not even that much of a stretch to make it happen as I'm sure that Sassuolo's CEO would happily accept Pobega on loan for a season plus separate 10m loan with option/obligation deals for Berardi + Scamacca.

Berardi, also slow, also does not press, and does not provide defensive cover.

The mentality needs to be developed for pressing and to do it the right way. I'm sure Dybala can press better than Brahim Dias. I mean he's available for free and if he is injured Adli gets his chance. Win-win situation for everyone. Berradi's stats speak for themselves. Plus Italian
Show hidden low quality content