The last part of the match has been a bit better but I am very far from loving this.

No stimulating tactics, no real drama or big chances or even sense of urgency. Technical quality hasn't been great either....

finally a shot on target for spurs after a billion years.

Tottenham Hotspurs Football Club should never be allowed to play in a Champions League final ever again.

Az. said:
And for Spurs as well, its good football in this second half especially.
Click to expand...

you have been watching Milan for too long.
J

Fuck me the Internet is going to be absolutely unbearable this summer.

Liverpool were horrible, couldn't even string three passes together.

sheva said:
you have been watching Milan for too long.
Click to expand...

Anyway, it wasn't amazing but it was a good match. Congrats to Liverpool, and congrats to Spurs for retaining their nr 1 bottlers title.

fantastic journey and a shit ending to this season
J

Reminded me of Istanbul. Truly the most despicable club blessed with extraordinary luck.

That was so shit.. eeew.

Just end the UCL before someone gets 7. Start the super league.

jammin said:
Reminded me of Istanbul. Truly the most despicable club blessed with extraordinary luck.
Click to expand...

Milaniscool said:
Just end the UCL before someone gets 7. Start the super league.
Click to expand...

Looserpool winning their 6th CL after a 14 year wait gives me hope that Milan can win their 8th in the next 5 years.

The lowest quality final in at least a decade. Culmination of the lowest quality champions league season with legitimately zero great teams. Liverpool’s disgusting long ball happy, transition heavy game that they seem to resort to in big games makes me want to tear my eyes.

Lol Liverpool played amazing football all season long. And one final where they didn't play to their potential, and people are spouting shite.

Plus there's been plenty of quality teams and football this year in CL.

People are exaggerating. There have been worse finals.

The problem with this one was that the build-up was much more exciting and full of drama. Everybody was expecting the end to be the same, but Liverpool took the safe approach and just cruised it. Kudos to them.

Happy for Klopp, he really deserved this title. No doubt best coach in the world on every aspect. Guardiola is miles behind.

Their squad is great + coach and team chemistry makes it even better.

If they don't sell any of the assets + keep investing, I can see them dominating for at least 3 more years to come. Real, Barca and Bayern will need some time to reboot. PSG and City just don't have CL DNA no matter how much they invest.

Basically a Premier League match (i know it technically is)

Theyre coming for us. Its happening guys. We can no longer hide behind our 7


Sent from my iPhone using Tapatalk

Neruda said:
Theyre coming for us. Its happening guys. We can no longer hide behind our 7


Sent from my iPhone using Tapatalk
Click to expand...

If I see a team tie Milan for UCL wins I'll throw up, especially if its Liverstool 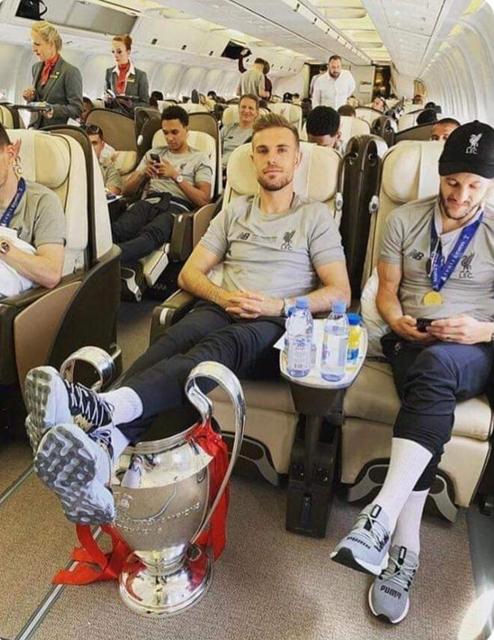 Whoever put Ronaldo there instead of Maldini deserved life imprisonment.


Fuuuuck I cant stand teams catching up to us

It's up to Milan to beat Liverpool in the final a few years from now.

That was a great goal.