Your dream XI and tactics

I'm starting this thread purely for fun. This isn't meant to be a "Best XI" thread or anything, just XI footballers who play way YOU LIKE. What I'm asking if MAKE A TEAM, not collection of 11 best attacking players in a formation which won't work with a midfield of kaka,cristiano ronaldo and xavi (like magazines and award committees often select). If you were a coach, unlimited budget, nothing stopping you (like fact certain players won't leave) what would your XI be?

If you are going to use players from previous time periods please specify. I will make two XIs. A current form team (last 2 to 3 years) and a timeless team (IE I'll specify "Sheva 99-06" or whatever). .

I plan to do two teams, a current form one and a all time team. All time team I keep making adjusts too, so i'll post later but here's my current team What can I say, in terms of pure football I enjoy to watch vintage ancelotti football is type I prefer most. Over Barca, Man Utd, Mourinho etc. etc. Theres probably some bias/nostalgia in it but hey we all got our preferences

In my opinion, Drogba is simply best CF in world. I love Ibra, but Drogba does more a pure CF's job than Ibra who is a bit more of a magician.

Ronaldo would be a #7 striker, which is probably his best role. The Kaka/Sheva role. I could use messi here too, but I like Ron more. He's just such a machine, and when he's given this role (free forward) he usually contributes with a massive amount of goals and assists, headers, free kicks etc. etc. etc. I often find him too isolated when he plays pure winger role.

Sneijder for me is best #10 in world now. Inter douche, but he's special.

Midfield was hardest part for me cause I'm a big fan of CMs in general, different types etc.

Pirlo is don't need to explain, just cant leave him out..... Essien I don't need to explain. De Rossi actually could contribute 6 to 9 goals in a team like this where he isn't doing a pure DMs role. I thought HARD about lampard too, but decided to go with more muscle. Play possession, push forward when needed and be fine defensively...

Defense speaks for itself, and what i expect. Narrow team so wingbacks will take of it.

Buffon may have declined a bit from 'his prime' BUT i still find him most reliable keeper. Even if reflexes r slower, he never makes a real tactical error

Edit: I know I'm begging for insults for the usual 'stupidity triad'

I'm actually VERY curious what everyones ideal team (present and past) are. Who would you play, how would you align them, responsibilities, lets have a little fantasy FM fun. No right or wrong

+ points if you include merkel, verdi TS and Nesta are given for me.

I know Chiellini is a CB now, but he started out as a LB if I remember correctly. With unlimited funds I just double his pay and tell him to play there again. I've always preferred Alves over Maicon for some reason. Like his style of play (- his whining and diving).

I don't have any real destroyer in CM, but those 3 can divide the defensive work between them as well as going forward. It could work

With Chrissy and Messi on the wings, playing Ibra is impossible. Rooney is more direct and would do a lot better. Drogba could also work.

But a team with so many stars would never work. To many strong personalities.

I believe this is the best current team there is. Somehow I couldnt place Messi where Pato is standing...it's a feeling I acutally liked drawing formations, so I made up a best current Serie A team: Up for balance too. Defense is experienced + CBs used to play together. On top it's a younger team but it's mostly experienced too. Cesc has some defensive qualities which is good. Pastore is flavour of the month I know, but lets say it's a team I'll do ATM, Pastore is on awesome form. Suarez+Pato seem similar, Suarez is IMO better as a SS, his good at assisting, Pato is more explosive, and possibly has more pace. Both have great goalscoring instincts. Needless to say I wanted to have a player that I'm sure will do anything for his team to win

Fuck with super dreamy line-up, I'll go with this.
Underrated or Mediocre dream teams if you're n00bz PoV FTW ! I'm big fans of battering ram striker, even if they doesn't score much they have big influence to teams because they're open space to other player. This will be Almeida/Floccari jobs n Miccoli, Guberti, n Hamsik gonna exploit that space.

On mid-line I choose Hamsik as main-motor n playing ala Fabregas @ Arsenal doing a lot vertical rush as opposed with Guberti on left flank n Miccoli find space for himself seeking simple deadly trough pass n sometime there will be many interchanging action on final third from attacking personnel, n Hamsik not gonna forget his defensive duties too with his tenacity, gonna help alot Palombo the main DM.

Vargas will help offense a lot despite his role so deep on formation, n to compensate that the LB gonna always sit in the back n not too mention Yepes not too fast too.

For Zapata selection, yeah his lack of brain n natural positioning talent is worrying, but Yepes gonna make him seems alot better with his command, the raw athletic abilities of Zapata gonna used more properly that way. And Abs n Lichtsteiner is underrated. Me and Milano did this and made the best team ever seen, sadly I've likely deleted the pm, but it was a sort of NFL inspired team, a 3-4-1-2 with 4 hulking midfielders then 3 long ball whores behind them playing as CB's. It was brilliant.
M Kalac#16 said:
Me and Milano did this and made the best team ever seen, sadly I've likely deleted the pm, but it was a sort of NFL inspired team, a 3-4-1-2 with 4 hulking midfielders then 3 long ball whores behind them playing as CB's. It was brilliant.
Click to expand... Pressure with 6 DMs just beating everyone up. Either back pass to super deep lying playmakers or just kinda beat the ball up into the box for pippo.


This team, will beat your team. Physically. the philosophy of my team is possession and swag.

Senatore_M84 said:
I'm starting this thread purely for fun. This isn't meant to be a "Best XI" thread or anything, just XI footballers who play way YOU LIKE. What I'm asking if MAKE A TEAM, not collection of 11 best attacking players in a formation which won't work with a midfield of kaka,cristiano ronaldo and xavi (like magazines and award committees often select).
Click to expand...

ok... fine, take out one of the front 3, and stick Nesta at the back, and swap Becks for Pirlo.

hdcantona said:
ok... fine, take out one of the front 3, and stick Nesta at the back, and swap Becks for Pirlo.

finally someone else who fantacizes about a pirlo, brocchi reunited midfield 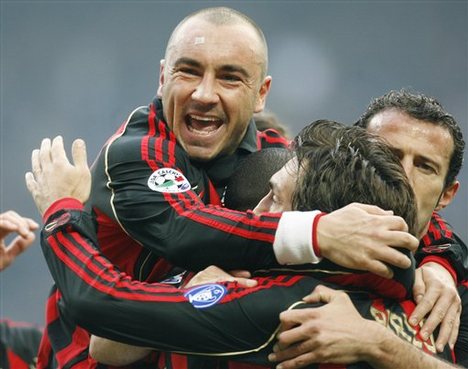 put favalli in your formation.....

I couldn't kick out any of that defence

Maybe I should put Cristian Zanetti in my team...

Mine's a lopsided 4-4-1-1. It is athletic and aggressive, and it brains very smartly indeed. Without the ball the full backs would drop deeper. Busquets would play the anchor man to break up the oppositions play, while Toure would act like a destroyer to regain possession. Sneijder and Ronaldo dropping deep while Milito staying upfront.

With the ball Busquets would drop back to form a three man defense to allow Evra and Maicon to bomb forward. Toure would play a holding role because i think his passing is underrated. Essien plays a standard box to box role. Ronaldo would interchange positions with Milito who´s drifting out wide from time to time to allow sneijder to attack to the middle.

Picked Mourinho because i think the teams fits his direct approach of play especially the attack.
S

I suggest a traffic cone in a jersey instead of Busquets.

Calum1903 said:
I suggest a traffic cone in a jersey instead of Busquets.
Click to expand...

don't worry, I'll do what Busquets does, only for 1/10 what he demands
F

hdcantona said:
don't worry, I'll do what Busquets does, only for 1/10 what he demands
Click to expand...

You mean stand just infront of the defense and side-way pass? Well, okay, you might be able to do that. (Although not as good as him, obviously) But would you be able to dive like an Olympic swimmer at every slight contact?
I highly doubt it.

The man gets paid for a reason. Look at him, it's like a giant child.
S

Fiero said:
[/U]The man gets paid for a reason. Look at him, it's like a giant child.
Click to expand...

I'll pay for him myself with skills like that

I probably laughed too much at this. The music certainly helps!
S