VooDooDoll said:
it may be money from pogba transfer - over 40 millions for raiola.
Click to expand...

No Raiola got 25m IIRC

Dawn said:
No Raiola got 25m IIRC
Click to expand...

Either way that dude is one rich mofo

Clubs in EU having the highest wage bills Clubs in EU having the most debt

We should be clear of debt.
S

something fishy about that hey? pathetic club. Bribed their way to 5 titles in a row.

Summer is not yet over but we have spent:
- Over 170m transfer fee + 47m (bonus/obligatory purchase).
- Our wage bill increase more than 60m
- Total money spent on (new) salaries and player amortization annually will be more than 116m

how does all of this fit in regards to FFP???

If Fassone had been in charge for the last decade we would be light years in front of Juve. Unfortunately with Silvio and Galliani's incompetence we are light years behind them.

The future is bright though and with Fassone in charge we should be able to make up the lost ground very quickly.

Accoring to Il Corriere dello Sport, the new investment fund that will refinance AC Milan's debt to the Elliott group, would be Highbridge, with an agreement about 8 weeks. Highbridge is a big international foundation based in Hong Kong and New york " will function as a bridge to get Milan out of their deep debts, known as Highbridge are in contact with Milan's advisors to study the restructuring of the club's debts."
F

So, hopefully no more rumors we are broke for another 3 years?

I'll also do everyone a favor and say this - noone would give Milan 400m if there were no financial guarantees from Li.

LMAO. This should be more exciting than the garbage on the field.

On football italia as well:

You can shrug this off as "oh noes doom and gloom", but its most likely true. Quite brilliant on Berlu's part though

The thing that might save us in the end, is our name. Some investor will surely buy us off in 2 years tops, when the Elliot fund puts us on the market.

The Rossoneri were taken over by a Chinese consortium, Rossoneri Sport Investment Lux, in April led by Yonghong Li.

Clubs which have recently been taken over can apply for dispensation to extend their Financial Fair Play responsibilities over four years.

However, they must still submit realistic plans to become profitable or face sanctions from European football’s governing body.

Milan submitted accounts to UEFA earlier this month, as they hope to come to a voluntary agreement over their FFP obligations.

This morning’s Marca though is reporting that UEFA are completely unconvinced by the plans, as all the investments have been made based on the sporting success of the Rossoneri.

Given that they’re already 11 points away from the Champions League places, that isn’t seen as being a sensible plan to become profitable.

If UEFA do reject the plans they will have to come up with a new arrangement and possible sanctions for Milan, which could include being barred from European competition.

While this is still unconfirmed it adds to troubling rumours around the club, with the New York Times reporting last week that Yonghong Li is unknown in China, and may not own the mining company which is said to be behind his wealth.
Click to expand...

Fuck NY Times, all the money on this earth is an evualation of the fortune (estimable resources) you got or you steal. So "Li is a fake businessman" or the remix "Li's brought fake motherfucker cash to buy my AC Milan" I don't care. AC Milan will be back soon with victories. In Li we trust not Happy GTFO.

GAMilan said:
LMAO. This should be more exciting than the garbage on the field.
Click to expand...

I had a good laugh reading this. Thank you.

Yeah I think this is all speculation... I think the true owners of Milan are yet to be revealed, but that's become the norm today with a lot of big spenders preferring to remain anonymous.

And even if their speculations turn out to be true, I think the Milan brand as a football entity is well known ... and sooner or later the club will fall in the right hands that will bring us the success Milan fans have become accustomed to.
C

They have 15,000 members which is double that of FIF (not sure how many active though), but no one has even posted in their financial thread since January. That's fucking unreal. Every bit of news about Suning, good or bad, is discussed here in great detail and yet the situation over there seems to be ignored in recent months. Unbelievable considering the circumstances.
Click to expand...

The financial situation is frequently discussed in the Rumour Commode, and people have offered a wide variety of opinions on the topic.

In season 2017/2018 Milan's revenues from sponsorship deals (excluding the two main shirt sponsors) should increase by around 15%, according to Sports Sponsorship Insider.

Milan's Chief Commercial Officer Lorenzo Giorgetti states: "We are working to make our assets more captivating on an international basis. Our new shareholders are helping the club change mentality, to make it clear most of our fans are outside of Italy. In many parts of the world, AC Milan is a brand with a huge legacy and many ambassadors and not just a simple football team."

"2011 was the end of a very long cycle of successes, so there was a lot of respect from the sponsors, in light of what was won by the previous ownership in their best years," Giorgetti illustrated.

"However, the fact that we have not played in the Champions League in recent years has had no impact on sponsorship revenues."

Milan plan to maintain that growth through some drivers for the club partners. For example, the improvement of in coverage and engagement on global level through digital distribution and social media.

"Starting this season, everything about our sponsorship agreements is improving: coverage is increasing, our global audience, all KPIs (key performance indicators) are moving in the right direction," Giorgetti asserted.

- The two Main sponsors Adidas and Fly Emirates; the first will pay around €19-20M in their last year of contract (then Puma will take over with a lower base amount but would reach the same amount with bonuses) and the second will pay €17M.

- Nine Official Partners: Alpenwater, AON, Fujitsu, GKFX, Nilox, Konami, Radio 105, Ricoh and DXC Technology. EACH of these agreements has a value between €0.5M and €1M.

- Milan's first Regional Partner, awaiting further developments from China, is betting agency VWin, whose revenues are estimated to be €500K. 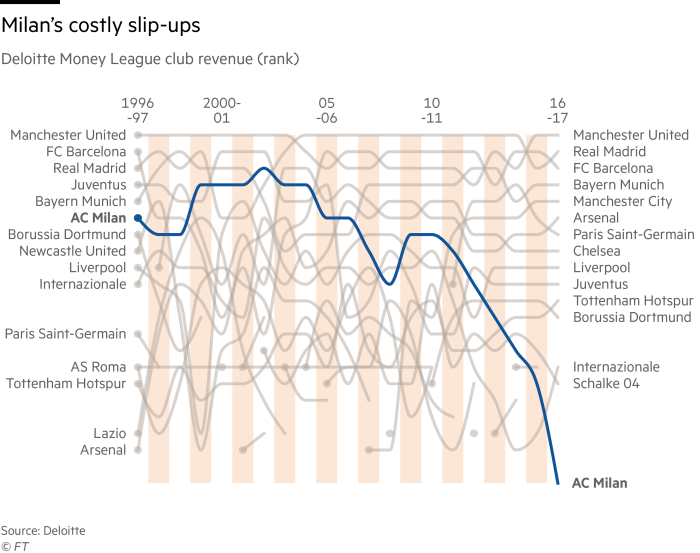 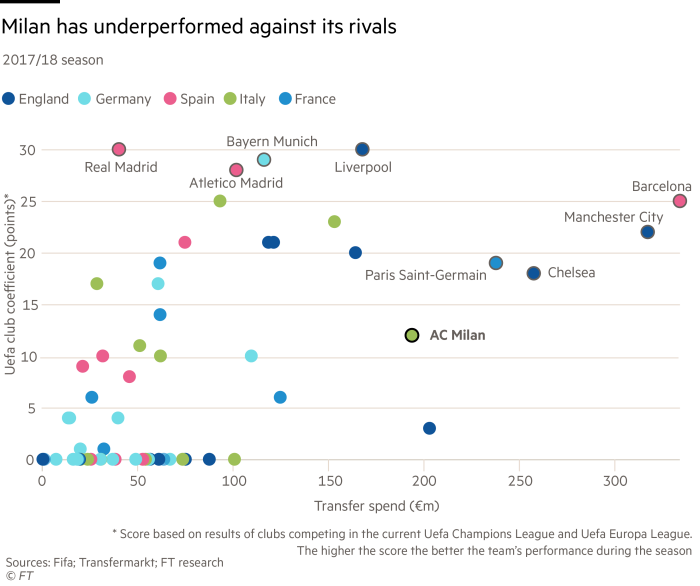 So, pik. Again, no mortgage? Li has lost it all?

Does anyone have any clue of what Milan's ownership structure is now, post Elliot's takeover of the board? It seems like there was some clause in Li's loan agreement with Elliot that they can convert their loans to shares in case of default (which must have been at a very favourable valuation for Elliot). But I haven't seen any info clarifying this. Anyone has any info?

the whole thing is still confusing. Li mentioned in the letter that he won't allow elliot to drive the value of milan lower. does that mean Li is actually going to get something out of it? or has he completely lost milan?

I don't think there is any other club with so many high-earners in the upper management.

Gazidis was one of the best paid CEOs in EPL, in fact there was a big fuss over him earning more than his Liverpool and Chelsea equivalents COMBINED......and he got a raise when he joined Milan...

and then there's Leo who earns almost as much as him.

Even Maldini's salary would put him near the top among CEOs of English clubs. You know, the ones with revenues twice the size of Milan's.


Meanwhile Gazidis and co are on a mission to trim down the wagebill by not renewing with Abate and Zapata.

Goodfella said:
I don't think there is any other club with so many high-earners in the upper management.

Gazidis was one of the best paid CEOs in EPL, in fact there was a big fuss over him earning more than his Liverpool and Chelsea equivalents COMBINED......and he got a raise when he joined Milan...

and then there's Leo who earns almost as much as him.

Even Maldini's salary would put him near the top among CEOs of English clubs. You know, the ones with revenues twice the size of Milan's.


Meanwhile Gazidis and co are on a mission to trim down the wagebill by not renewing with Abate and Zapata.
Click to expand...