Minding the Gap. really good one. Probably would've gotten my vote, had I been in the Academy.

Maradona - yeah, all seemed old to me. Would've needed a 5-10 part series for me. Maybe love Kusurica one more as it explores the chaacter more poetically. But, well stitched and good job nevertheless.

HBO Documentary The Talwars: Behind Closed Doors. The USA version? Watched it and it's really confusing. Honour killing looks like the best bet to me. While the most trust I have in characters who advocate the opposite.

Are our Indian members well in the subject? What theories do you support? What else to read about the subject? (listened one pod about Trials By Error pod that advocates against my initial viewpoint)

Jasper said:
Maradona - yeah, all seemed old to me. Would've needed a 5-10 part series for me. Maybe love Kusurica one more as it explores the chaacter more poetically. But, well stitched and good job nevertheless.
Click to expand...

Is this the Asif Kapadia documentary? Where did you watch this Jas? Is there a torrent out? Nobody wanted to watch this at the pictures with me.

vB9 said:
Is this the Asif Kapadia documentary? Where did you watch this Jas? Is there a torrent out? Nobody wanted to watch this at the pictures with me.

Kapadia, yes. Watched it in a theater.

Hope to watch this soon.

Liked this more than Free Solo. More of a door into that world. Explained the whole El Capitan ordeal.

Then watched Meru and liked it more than both previous. Feels really inspirational* even if people doing the climbing clearly have and (adrenaline) addiction problem.

* - mind goes straight to all the mountaintop idions. and #mymeru can be applied to all sort of hurdles one takes on in a life.

Gabriel Hernandez was really uncomfortable watch. Overall not too special either. 3/5

I don’t have HBO here. So I’ll look into another source for the McMillions docu.

The Hernandez docu is something I can’t watch.
S

Aaron Henrandez tho - can't remember. I think I knew all the stories in it already so it was a filler to me. Few friends (who are into NFL as well) liked it a lot.

the stories people told when there was no internet

The Vow starting to get interesting. I it available as whole in some HBO app?

I knew it was bad, but not that it was deliberately made to be evil.

I knew it was bad, but not that it was deliberately made to be evil.
Click to expand...

Expected more but its ok i guess.

Thenebra said:
Expected more but its ok i guess.
Click to expand...

Well it is Netflix. I was surprised that they even aired some of these things.
S

537 votes. (HBO) About the Miami (Florida) debacle 2000. Pretty amusing. more like storytelling point of view. Some memes were too much but overall smooth and easy.

The Vow started great but ended on a wuss. Naturally they announced second season. Hopefully they can cook up the court drama a bit. Not like a cliche of a sophomore album being dry. Kinda like the scientology series ended up.
S

Untold series on Netflix ks really 30 for 30 level stuff. Malice at the Palace compulsory viewing. Deal with the Devil is so batshit crazy story (Cristy Martin) you need to see it. And Crime and Penalties has real life Slapshot team building by mobster 18 y.o. son AJ. Throroughly enjoyable.

Other 2 episodes - Caitlyn Jenner and Mardy Fish - are worth the time to. Even if not my favorites the introspecion might interest others.

Enjoying Nuclear Family on hbo too. Done by a girl who lesbian mothers were sued by the gay sperm donor after they introduced him to the kid(s). Cant wait for last episode. 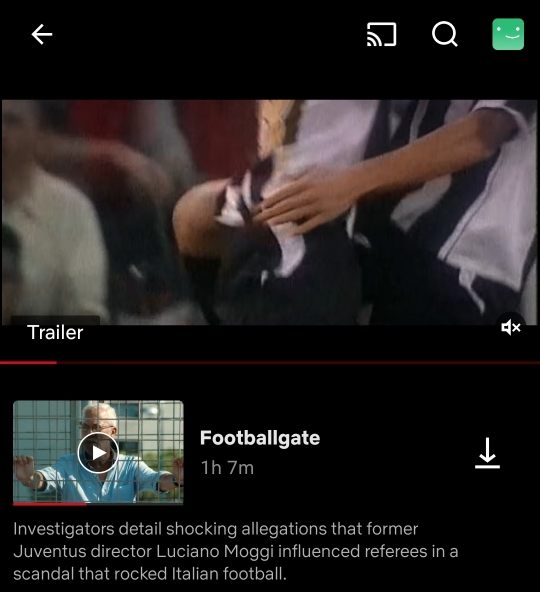 Fkn hell I saw that episode today after I saw your post yesterday. Disgusting club. And they haven't stopped! They just got smarter
S

Rick James.was.quite.sad.unfortunately. Even the "sell my fucking record" episode didnt live up to hype.

Meani(our guy) contacted and threatened the ref designators too, and the stuff he said implied that Galliani is on it.

They were all engaging in those sort of stuff - Inter(Facchetti & Moratti) included. Juve/Moggi just took it a step further.

The biggest crime of them all was the Inter theft of the 2006 title.
They were shit on the pitch, dirtier than us off it, and yet somehow they managed to legally steal it and keep it. I'm with Juve fans on that part, Calciopoli was a farce organized by Moratti. It highlighted corruption in football, but not for the right reason or by non-guilty parts.

Making of a Murderer on Netflix - incredible story... life is weirder than movies

The Beatles were one solid unit...like all bands should be. At first I thought Yoko was the main reason the Beatles split but after further learning John, Ringo, George & Paul were already on the verge of splitting up anyway so she's not entirely at fault.
S

The Line (apple tv) - loved it. About navy seal Eddie Gallacher reported by his squad.

Also loved Life of Ivana about a woman living in Russian tundra. Tough.

Has this been here already? -

Super Bob Einstein (hbo)was also great
Not much as a doc but a nice tribute to the collection of his bits. I was unaware of the Super Dave character so i have some nice time ahead. The post accident interviews are golden

One episode Sogno Azzurro was bit of a let down. Is this version a compilation of the longer series?