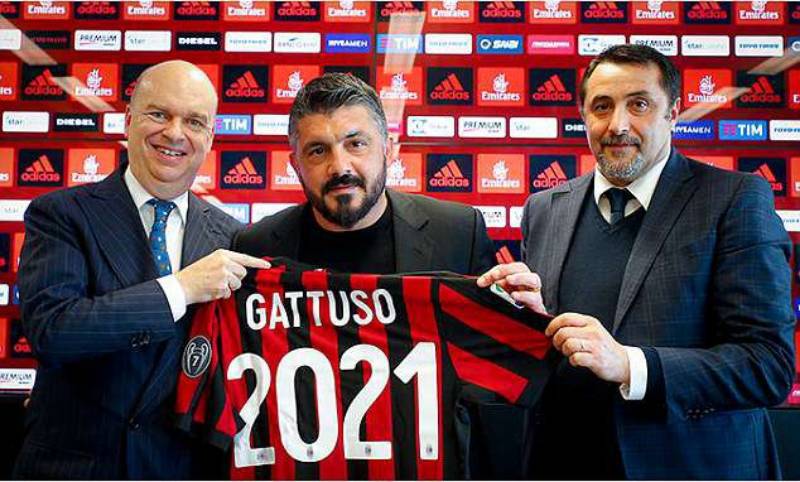 berlusconi and galliani would 100% hire gattuso you british fool

Do you watch Rocky everyday?

do you drink tea 5 times per day facing the direction of the tower of london?

Dont be daft, Sly... drink way more tea than that in a day.

Former prime minister Silvio Berlusconi will in November face charges for allegedly bribing witnesses in the notorious "Rubygate" scandal after being ordered to stand trial by a Rome judge on Wednesday.

Berlusconi is accused of paying 157,000 euros over the years to Neapolitan singer Mariano Apicella, who took part in many of the media mogul's infamous "bunga-bunga" parties and is himself on trial for false testimony.

The 81-year-old's court date is part of the "Ruby-ter" investigation, the third involving his parties and alleged underage prostitute Karima El-Mahroug, aka "Ruby the heart-stealer". The original trial, nicknamed "Rubygate" after El-Mahroug's nom de plume, saw Berlusconi beat an original seven-year prison sentence on appeal in 2014, a ruling that was upheld in Italy's highest court in March 2015.

The Ruby-ter trial deals with alleged payments made by Berlusconi to people who attended the parties in exchange for their silence.

Prosecutors allege that Berlusconi spent ten million euros ($11.8 million) between 2011 and 2015, of which seven million euros went solely to El-Mahroug in the form of cash, gifts, cars, provision of housing, payment of bills and medical expenses.

Under Italian law, local courts take charge of investigations of bribes paid within the city boundaries, and as payments were made in various cities, the case is being handled in seven different courts, including Rome, Milan and Turin.
Click to expand...

Berlusconi seems to have been rewarded for his act of self-sacrifice. Two days later, a Milan court announced out of the blue that it was lifting his five-year ban from public office imposed in 2013 along with a four-year prison sentence for tax evasion. He now looks like a mummy back from the dead, his face masked in make-up and his head caked with dyed transplanted hair. He had been unable to stand as a candidate in the election. Now he can.

So il Cavaliere (‘the Knight’, as his supporters call him) may just have to ride out one last time to save Italy — not from the commies anymore, but from the populists.
https://www.spectator.co.uk/2018/05/italy-turns-on-the-european-union/

My life is so perfect

My life is so perfect

I thought you were older.

Milan legend Silvio Berlusconi is expected to announce the purchase of Lega Pro/Serie C side Monza on his 82nd birthday.

The man who took Milan to the top of world football and controlled the club for over 30 years sold up to Yonghong Li in April 2015.

He misses the sport, though, and is set for a new venture with the local side that had for decades acted as a feeder club to Milan: Monza.

Berlusconi will reportedly complete the takeover on his 82nd birthday, September 29, with a ceremony marking the purchase of 70 per cent of the shares from current patrons the Colombo family.

He’ll again be accompanied in this venture by ex-Milan CEO Adriano Galliani, who had briefly quit football for a role in Berlusconi’s political party Forza Italia.
Click to expand...

Lol. Now I want him to live long enough to see Monza in Serie A and competing for honours

“Over the last three days, I received dozens and dozens of calls from players who are out of contract, agents interested in placing their clients with us, directors who are curious about the project,” Galliani told the Corriere della Sera newspaper.

“The football universe is fired up, attracted by the possible return to the sport of Silvio Berlusconi. Do you know what they told me yesterday? The potential arrival of the Silvio and Adriano double act is giving Lega Pro the same effect that Cristiano Ronaldo generated in Serie A.

“We had only recently sold Milan and missed football a lot, so chatting about various things with the President last year, we had the idea of buying another club. We already acknowledged the only side we could purchase without ruining the unique rapport we had with Milan was Monza.

“Berlusconi turned down offers to buy up several clubs over the last few months and I declined roles in more than one club. The President lives 3km from the Brianteo Stadium, I was born there and started my directorial career there.

“We really do feel like Ulysses returning to Ithaca.”

Monza have been going for 106 years, but never made it to Serie A.

“Over the last few days, Monza went from temptation to genuine idea. The President mandated me to call Nicola Colombo, number one at Monza, to verify the possible negotiations.”


“We all agree on the plan of developing a Monza squad made up entirely of players who can represent Italy at international level. We want Monza to churn out talents for Italy from the Under-15 side onwards.”
Click to expand...

It’s believed Berlusconi would buy 70 per cent of the club and become Honorary President of Monza, with Adriano Galliani as general manager and Colombo remaining as President.
Click to expand...

Adriano Galliani has assured the current crop at Monza that ‘there won’t be a revolution’ under him and Silvio Berlusconi.

Galliani will take over Monza’s management once Berlusconi completes his takeover of the Serie C, the pair having worked together at Milan for 21 years.

“There won’t be a revolution,” the 74-year-old, who was born in the area, told Il Cittadino.

“The club, team and their employees are calm and thinking about doing well, as has happened so far.

Just wondering, will Fininvest be involved again?
Click to expand...

He already started where he left at milan.

Monza have announced that former Milan owner Silvio Berlusconi has completed his takeover of the Serie C club.

Berlusconi’s purchase comes a day before his 82nd birthday and marks an end to weeks of speculation, while he is joined at Monza by long-time aide Adriano Galliani.

“The Board also appointed Adriano Galliani as CEO of the club.”

The former Prime Minister of Italy owned Milan for 31 years until selling up in 2017, with Galliani serving as CEO for the entirety of that time and the Rossoneri going on to win five European Cups, as well as eight Serie A titles.
Click to expand...

Thanks to Silvio Berlusconi, I return to my team of my heart and city. In September 1975, I became a shareholder in Monza thanks to Aurelio Cazzaniga and I found Felice Colombo as vice-President. They were a nice group of businessmen from Brianza.

“Monza form part of my life and they’ve shaped my whole life. I met Berlusconi on November 1, 1979.

“He invited me to dinner and asked me if I can build three TV networks with Elettronica Industriale.

“I gave him my word, but one one condition – that I could still follow Monza home and away.

“That’s when I resigned from Monza and moved to Milan with Berlusconi in February 1986 until April 2017, when we sold the club.

“On the day of their promotion from Serie D to Lega Pro, I immediately called Nicola Colombo.

“Monza isn’t me betraying Milan, precisely because I started at Monza and went to Milan on loan for 31 years.

“My life without Berlusconi would’ve been different and certainly less pleasant.”